News 5 Investigates discovered the Colorado Springs Police Department kept an apparent secret from the City and community for years.

For months, a spokesperson tried to prevent us from uncovering what the department did that ultimately improved police response times to “priority 1” life and death emergencies. 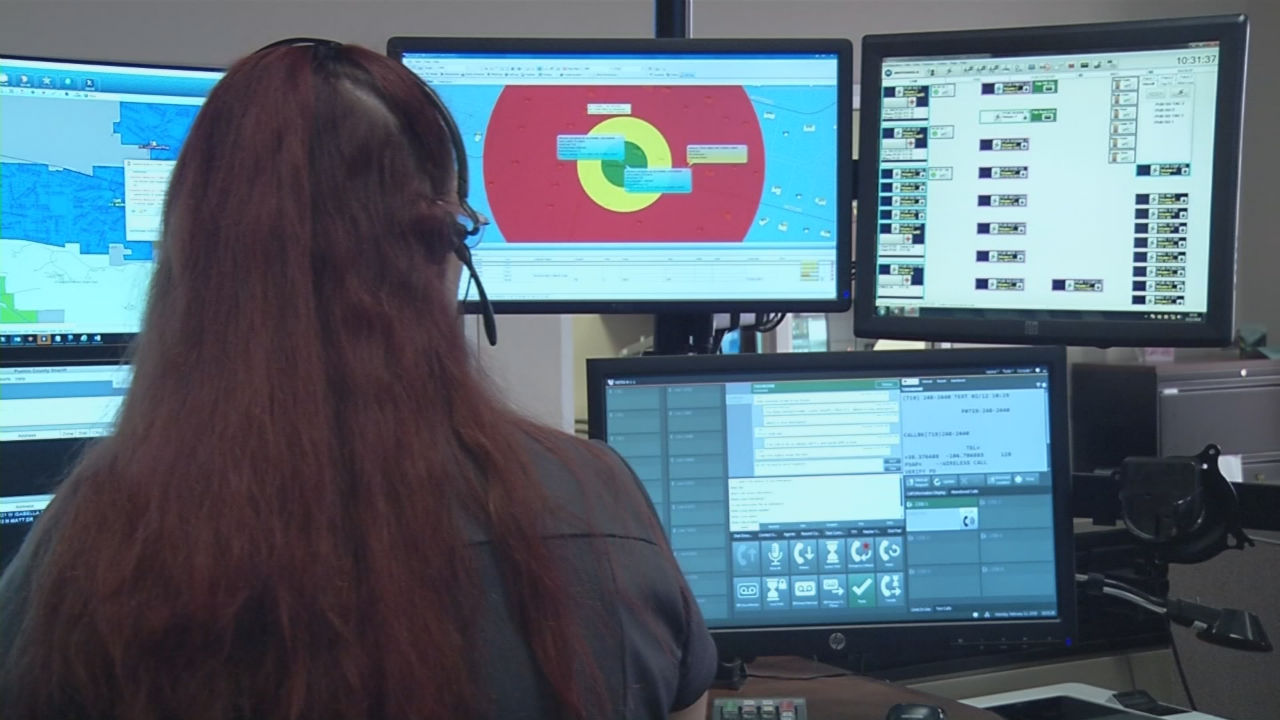 In 2015, the department removed more than a dozen calls that were previously coded as “priority 1” emergencies and dumped them into lower priority categories.

Below is a list of some of the calls CSPD no longer considers “life-threatening” matters according to data the department provided:

A list of all priority 1, 2, and 3 calls currently in place can be found here.

An in-depth analysis conducted by News 5 Investigates found controversial improvements to response times. Crime victims we spoke with say this is a band-aid solution that really doesn’t improve public safety. In fact, some argue it does just the opposite.

For example, calling Colorado Springs police to report a drunk driver on the road used to be a high priority 1 call. It’s now coded as a priority 2.

Police policy states they’ll upgrade the call to “priority 1” and respond quicker if the drunk driver is “going the wrong way on the interstate or major roadway”.

This “justification” provides little comfort for people like Kelly Sifford. 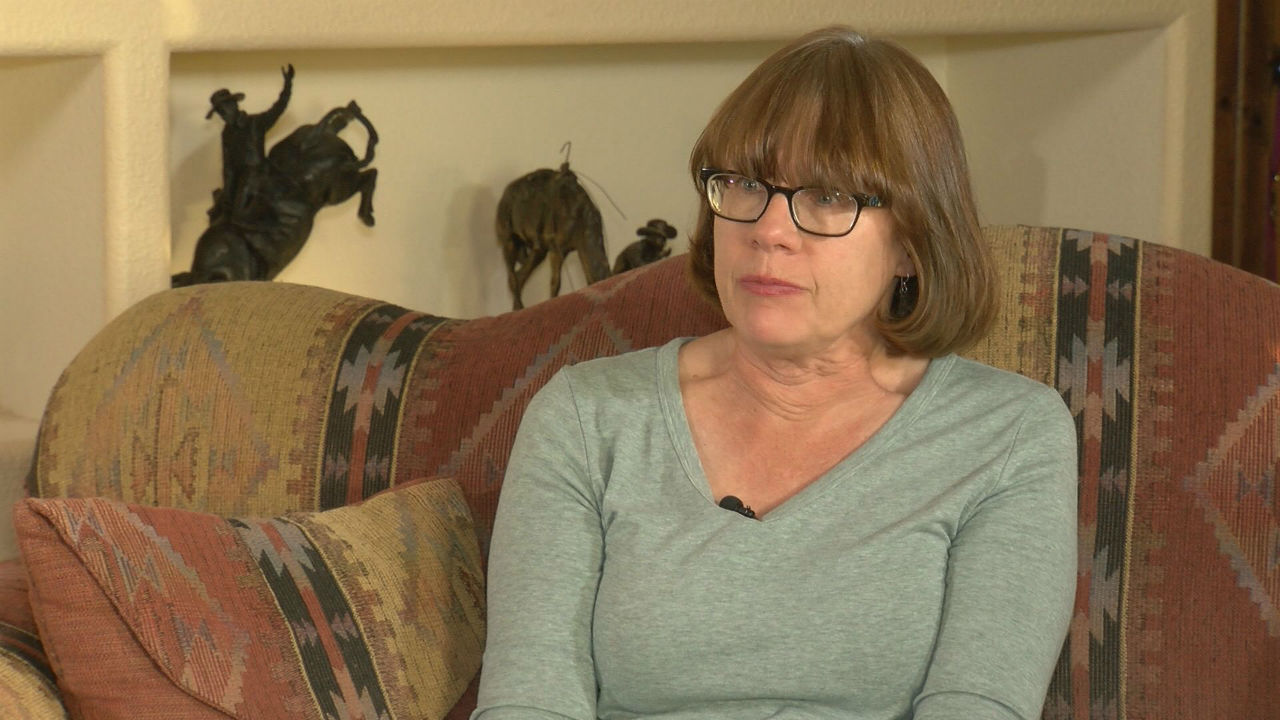 “It doesn’t matter whether they are going the wrong way or the right way, it’s just a matter of time before they hit and kill someone,” Sifford said.

A drunk driver killed her son, Kyle back in 2015— the same year Colorado Springs police lowered the priority for calls about drunk drivers. 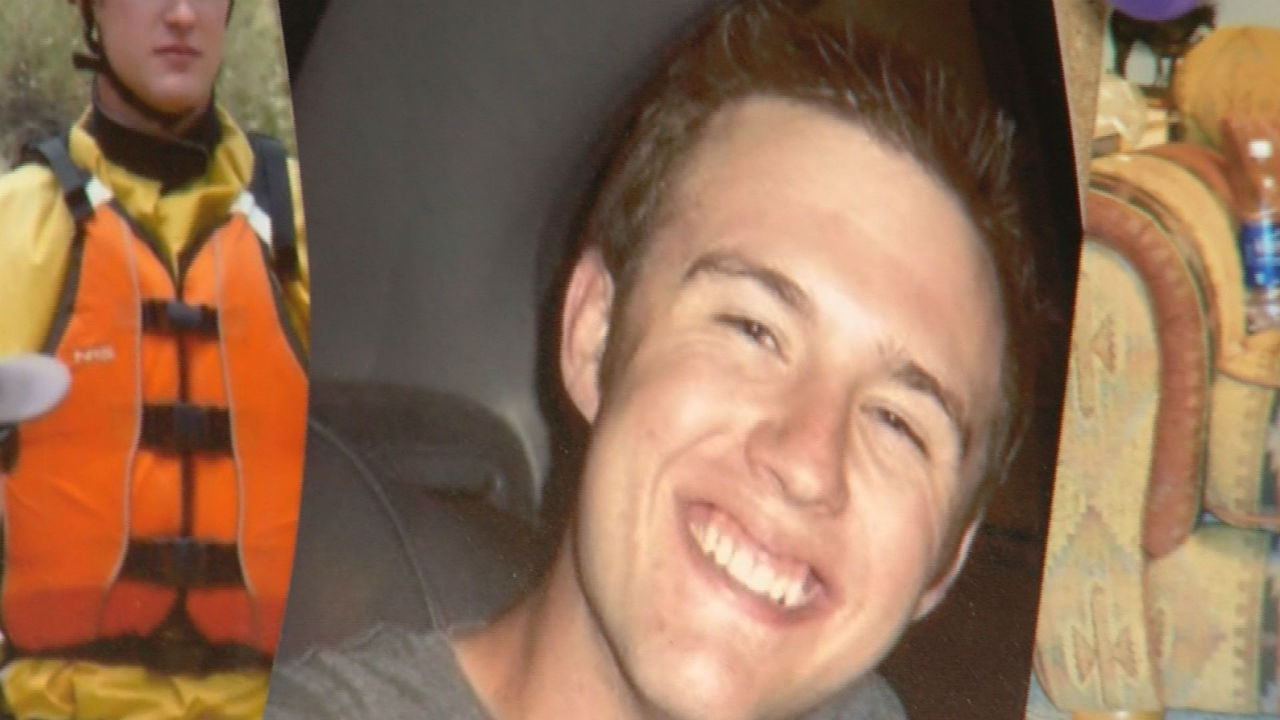 Kyle was on his way to work when a woman named Cassandra Griffin slammed into him. She survived and is now serving time in prison.

Unfortunately, Kyle’s son, Carson, is now having to grow up without his father.

“Kyle is gone forever,” Sifford said. “He was really amazing and there’s a hole that will never ever be filled.”

Sifford is now an advocate and works to raise awareness about the dangers of drinking and driving. She’s also a strong supporter of Mothers Against Drunk Drivers, or MADD.

She believes Colorado Springs police should rethink their decision to lower the priority of a 9-1-1 drunk driving call.

“It’s just a matter of time before they hit someone, injure them or kill them so unless we make it a priority to stop it and make it a priority 1, I mean their weapon is a vehicle,” she said. “A vehicle can do a great deal of damage.”

A drunk driver no longer falls into that category according to police, and neither do calls related to burglaries in progress, suicidal attempts, shots fired or traffic accidents with injuries. Colorado Springs police also code family and domestic disturbance issues as priority 2.

“It’s a high priority when a person is calling for help,” domestic violence survivor Lisa Jenkins said. “They’re in a situation where they have gotten enough strength to say ‘I am done and I need help’ and they should be supported.” 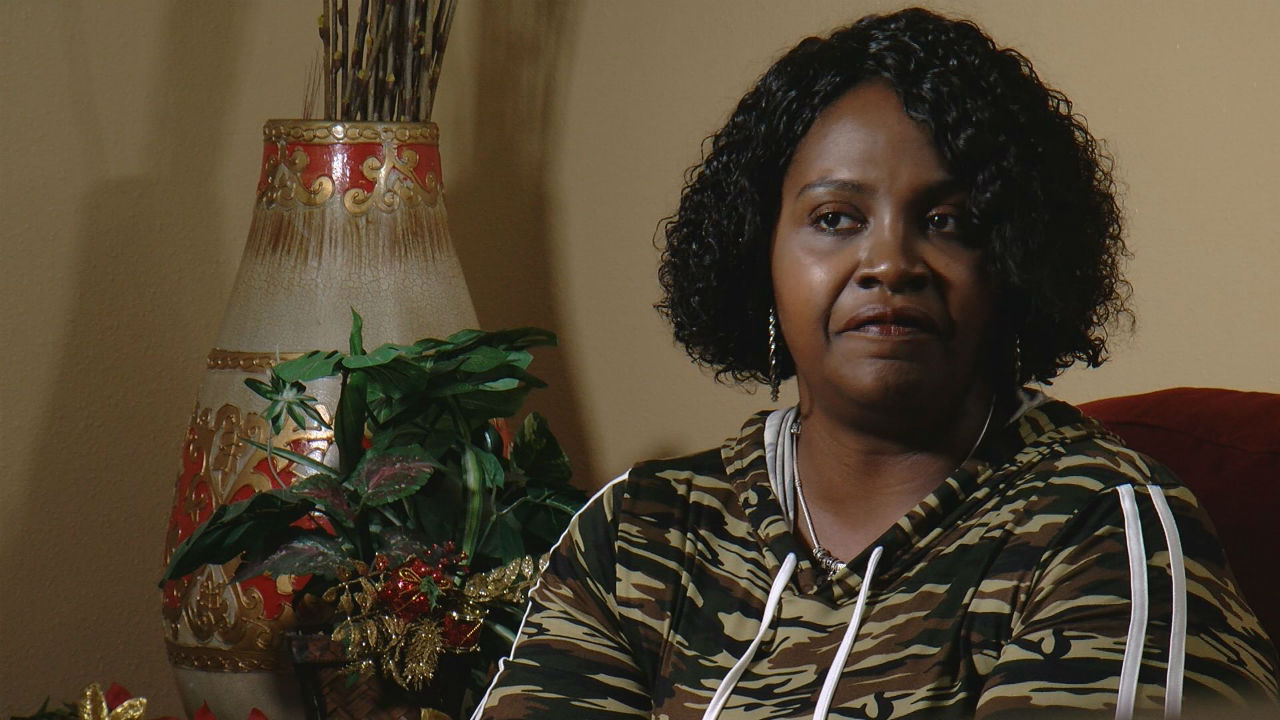 She was appalled to hear Colorado Springs police will no longer classify domestic and family disturbance calls as a “priority 1” matter unless the disturbance “turns physical or weapons are involved.”

“I think that getting that call it should be ‘Okay it’s domestic violence and we need to get there and get the family safe,'” Jenkins said. “It’s all about getting the family safe and determine afterwards what needs to be done. There’s no way to know from a phone call if it’s going to turn into a physical one or not with weapons because it can easily happen to where a person’s life can end when it just starts with verbal and it escalates that fast.”

News 5 Investigates started calling other nearby law enforcement agencies to find out whether they re-categorized and moved domestic violence and disturbance calls into a lower priority call bank like CSPD did.

News 5 Investigates asked the El Paso County Sheriff’s Office to provide a list of calls they code as priority 1, 2, and 3.

So why does CSPD feel these calls are less important? 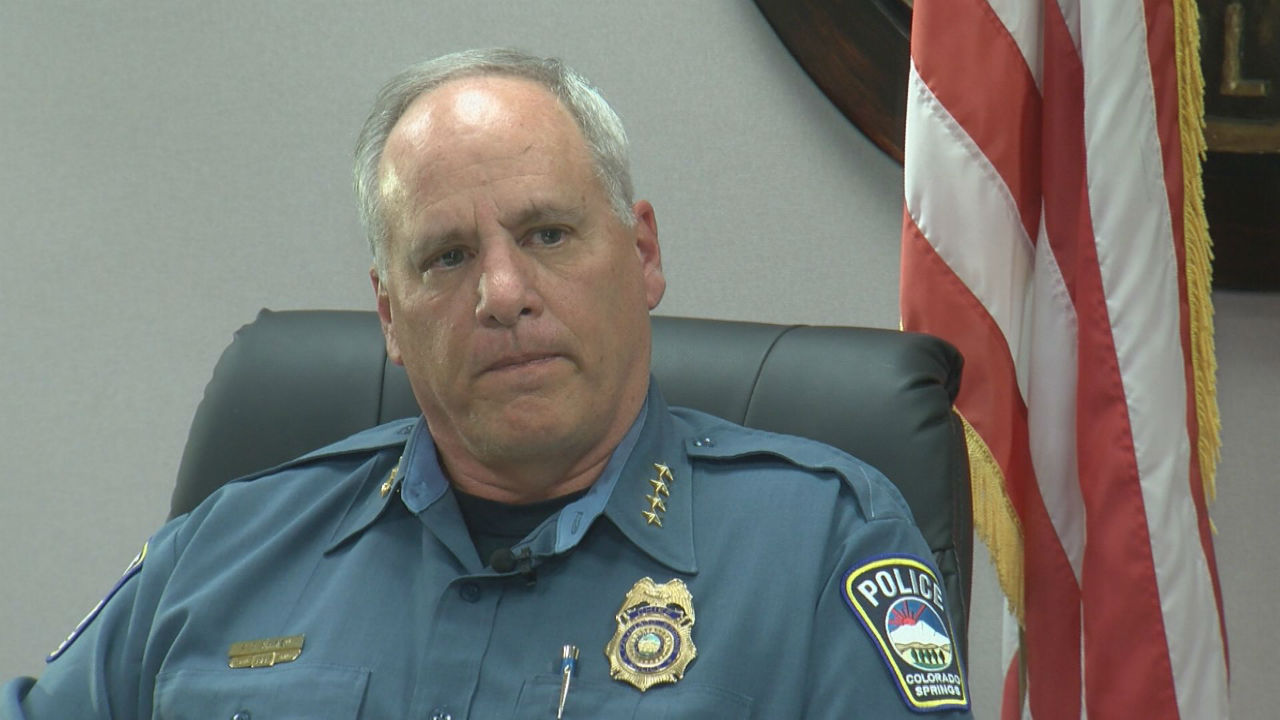 “We could talk about that some other time,” Police Chief Pete Carey said when asked about re-categorizing calls for service.

News 5 spent months trying to get answers from the Colorado Springs Police Department.

At one point, we were told the Chief would answer questions if we sent them via email.

A spokesperson for the department backtracked and then told News 5 management our questions were “too specific” and said we would have to pay money for research and answers, so we decided to catch up with Chief Carey as he talked about his upcoming retirement.

After 15 minutes of answering questions about his retirement, we asked about the re-prioritization of emergency calls.

Chief Carey would only say this before his spokesperson shut us down:

“We look at how we prioritize calls for service and from time to time we look at our policies and general orders,” Carey said.

As many law enforcement agencies now focus on mental health training and awareness for officers, CSPD no longer considers a call about a person threatening or attempting to commit suicide as life-threatening.

“We’re talking about priority of life,” Deputy John Hammond said. “My job as a police officer is to make sure that I save a life. Is suicide a crime? No, but at the same time it’s a life lost. If I need to utilize as much time as I can and ask much resources as I can, I’m going to do it.”

Hammond and a licensed clinician respond to crisis calls on a daily basis.

Before a ride-along News 5 Investigates participated in last week, we asked Hammond about attempted suicide calls, which Colorado Springs police say they’ll upgrade to a higher priority if “the person has means to act”.

Ross asked Deputy Hammond, “When someone calls 9-1-1 to report a suicidal person, can a dispatcher truly know whether the person has means to act by a phone call?”

“I’m going to say no,” Hammond said. “They (dispatchers) aren’t necessarily trained in asking specific questions on whether they have the intent to commit suicide. We really don’t know if they have true intent until we can get boots on the ground and until we can get that clinician in place to do an evaluation of that person.”

We repeatedly asked Colorado Springs police to explain what research they looked at prior to re-coding these calls, but we never did receive a clear answer.

News 5 Investigates uncovered the re-prioritization of 9-1-1 calls was done with little or no oversight. An open records request filed with the City of Colorado Springs found the police department submitted no documents to alert city council or the Mayor about the change with how officers respond to calls.

As part of our fact-checking process, we also submitted the same open records request to the Colorado Springs Police Department. The department charged us nearly $200 to tell us they never provided any information about the re-categorization of calls to city leaders.

Breaking down the number of “priority 1” calls and average response times: 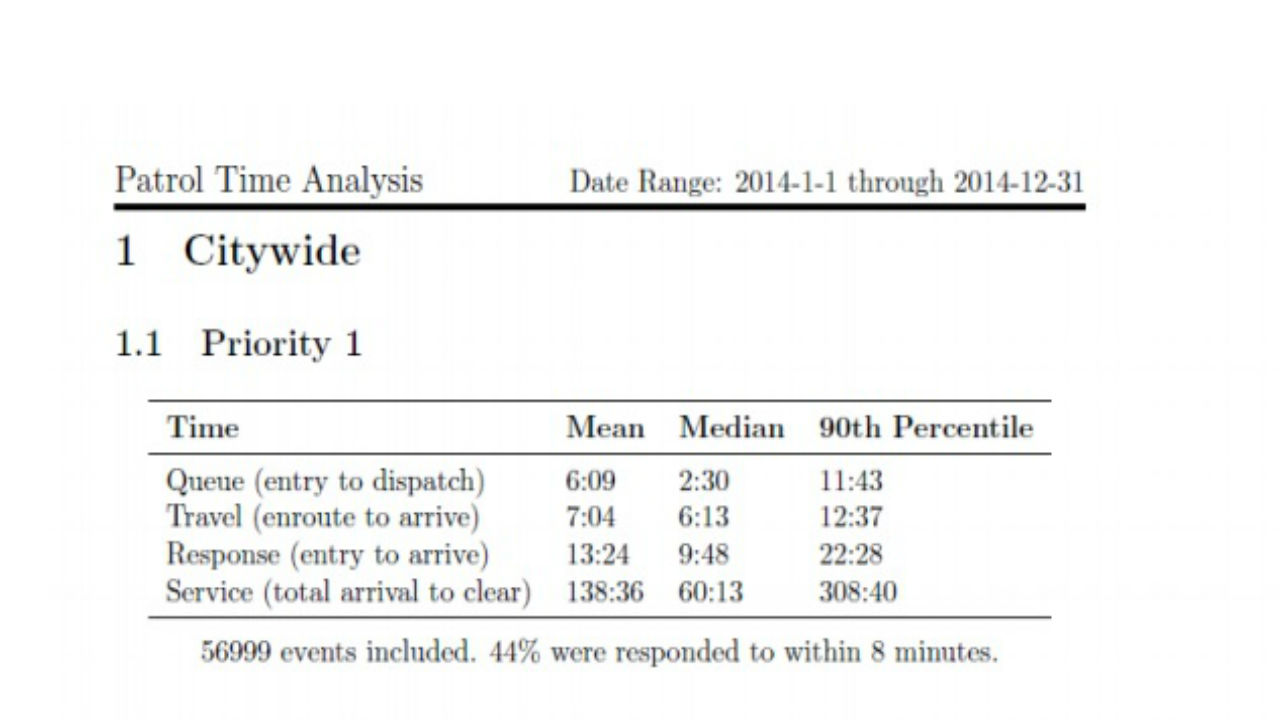 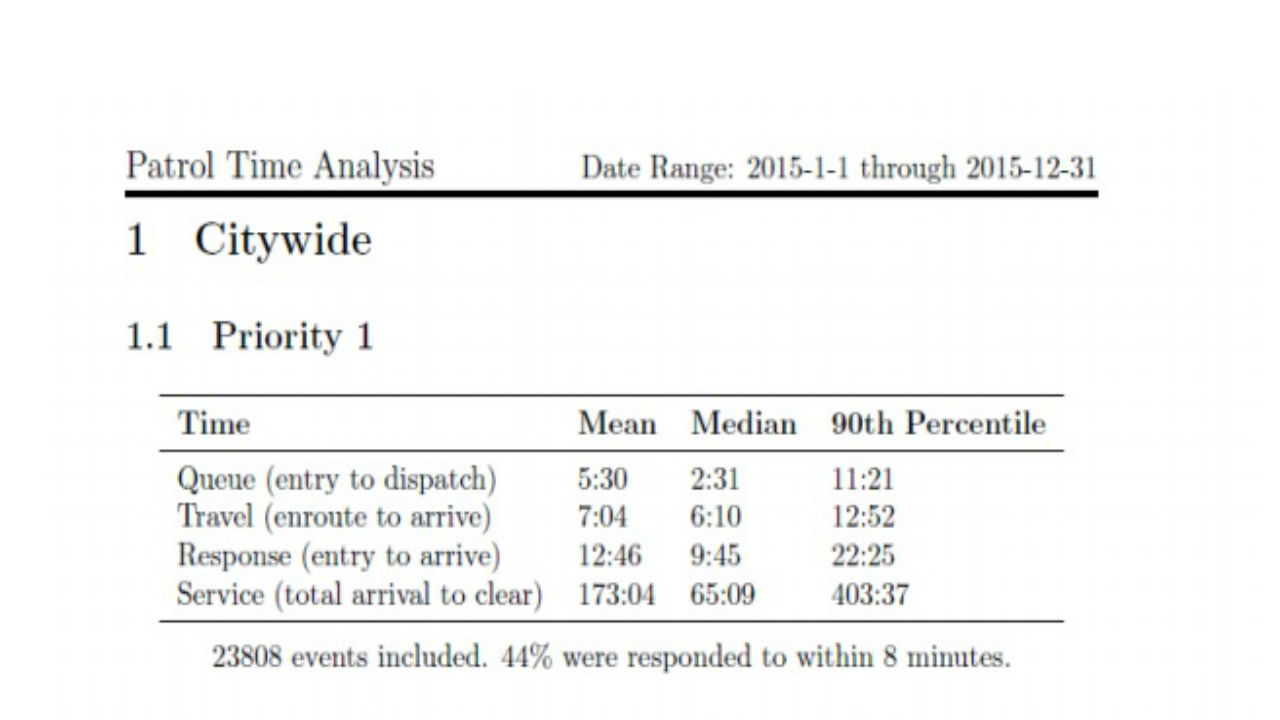 *Despite responding to 36,461 less calls in this category compared to 2014, average response times worsened. 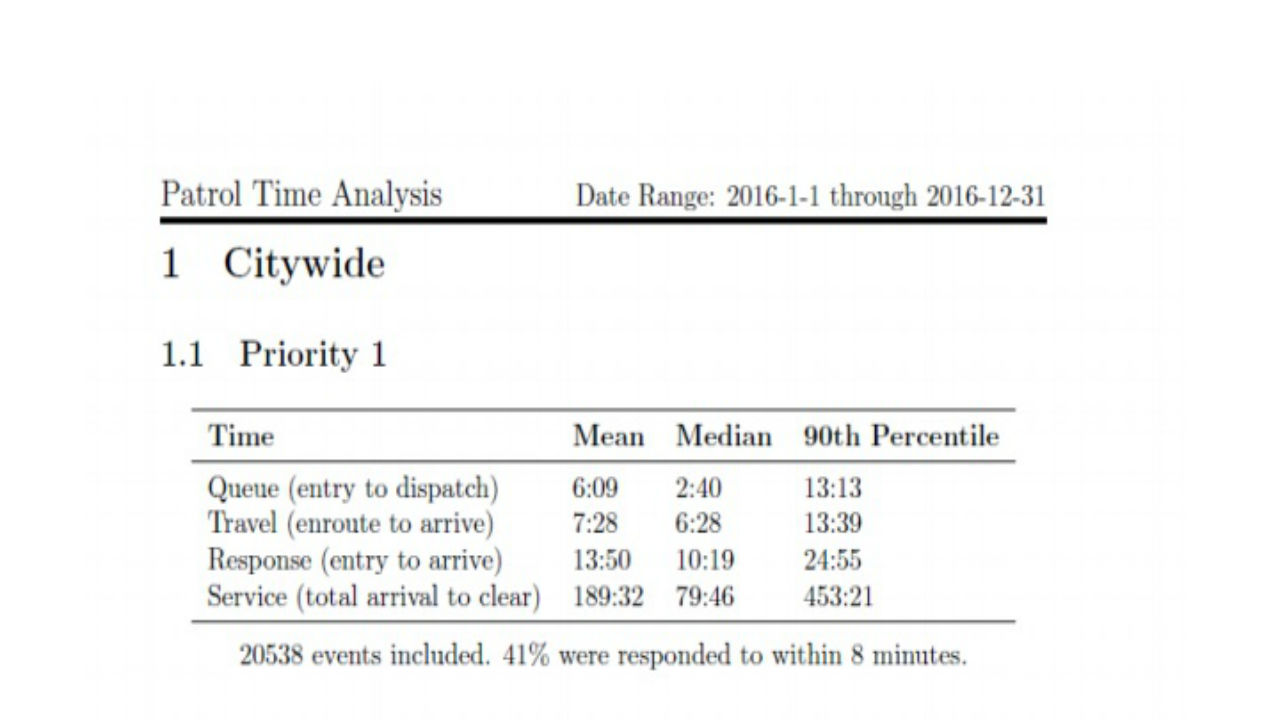 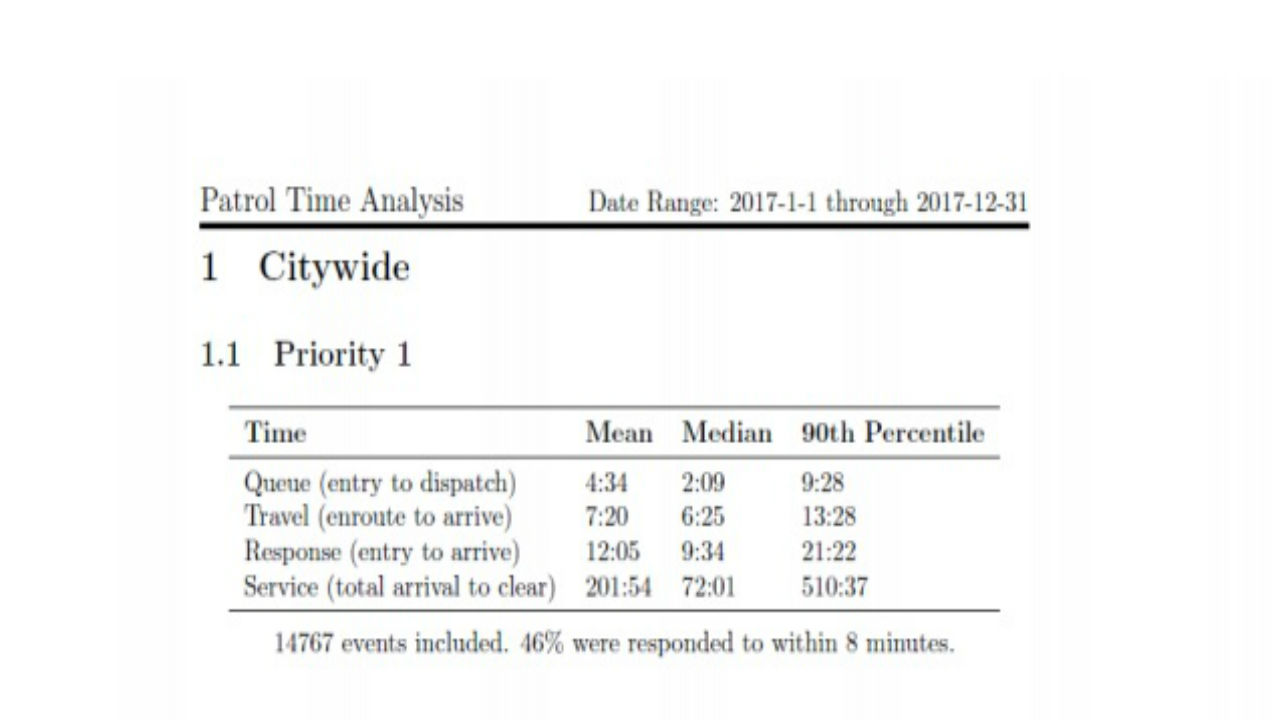 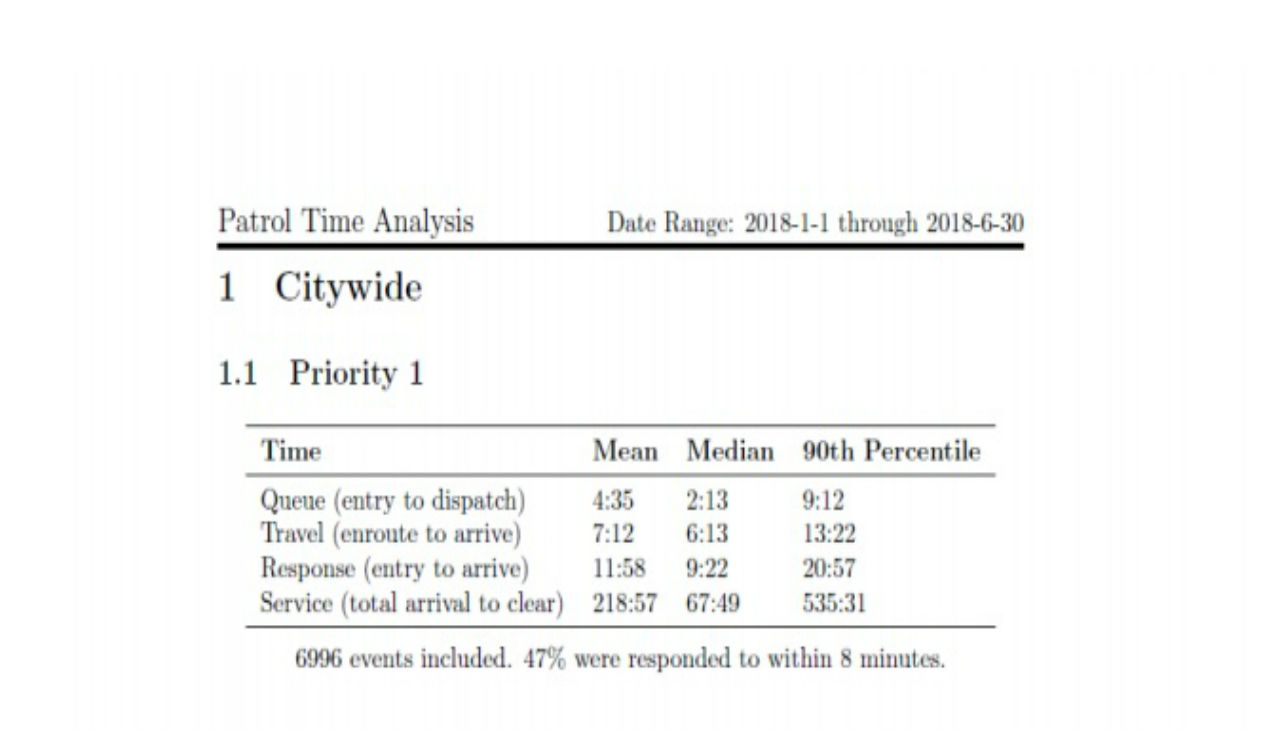 The nationwide “goal” is to respond to 9-1-1 priority 1 life and death emergencies within 8 minutes or less. However, there is no state law or requirement to meet this goal.

2015: (No change; even with the re-categorization of calls taking effect this year)

Although Colorado Springs police will not answer or address our specific questions, a department spokesperson sent us a generic statement which reads:

“The biggest point in our communications center discussion is that one call type can encompass many different situations so we can’t get stuck on where the default priority is set. The ERT’s and dispatchers all have the discretion to raise or lower the priority appropriately. Initially and for many years, there were only four categories of prioritization. As call volume increased it became vital that call takers had more tools and more ability to prioritize based on calls with most potential for loss of life. Before the change, “any active disturbance” was listed as a Priority 1 call. That meant that people yelling at each other in a parking lot would have the same priority as an active DV situation where a weapon was involved. Obviously, that wasn’t ideal.Therefore, priority one calls were redefined from “any active disturbance” to an active threat with imminent risk of bodily injury. The reprioritization was done to ensure resources were dedicated first to those that had the greatest risk of loss of life. This is a change that serves our community well. We don’t believe this change has impacted response times, but even if so, response times are dependent on many factors, so it’d be impossible to calculate the precise impact, if any, of reprioritization (vs. say, staffing changes, population growth, traffic, weather, call volume). DV calls were recategorized as a Priority 2. That’s inaccurate and the type of general reporting that causes accuracy/credibility problems. DV was not changed as a blanket change. Prioritization is based on the specifics of a call. In my previous correspondence with Eric, you have that information. But to further give you clarity — For example, the communications center must be able to prioritize DV calls based on specific situations. Say 5 come in at once. The communications center needs a tool to send available resources to the most dangerous. Therefore, an assailant actively firing shots in a house with others present will get a higher priority than a report of yelling from the apartment next door. The second call may get a priority 2, which is still an urgent response, but I think everyone would agree that the prioritization is pretty logical. Even that is an oversimplification but should illustrate the point. Finally, the comparisons of CSPD to the County or Monument/Fountain are not applicable based on the massive difference in population and call volume. When it comes to research, it would be wiser to look at market sizes and municipal vs. county governments as well as crime rates. Similarly sized cities for COS include Atlanta, Omaha, Raleigh Durham, etc. This response will stand on its own. We respectfully decline an on-camera interview.​”

For example, the spokesperson’s statement indicates that our statement about domestic violence calls being moved to a “priority 2” status is “inaccurate”, yet that’s exactly what records the department provided show.

Prior to 2015, domestic matters were coded as priority 1. They are now placed into the priority 2 call bank, pending information indicating the situation turned physical or weapons are involved.

Another discrepancy we noticed is that police stated the “prioritization is based on the specifics of a call”.

However, the department initially said in its statement that “dispatchers have the discretion to raise or lower the priority appropriately.”

Is it possible one dispatcher with decades of experience would code an emergency call differently than a new dispatcher using his/her discretion?

The statement provided to News 5 also says that before they re-coded calls for service, all “disturbance” calls were given a “priority 1” status, which is true. However, the department failed to explain that there were four different categories of “priority 1” disturbance calls:

Potential flaws in the system exposed:

While Colorado Springs police say they will upgrade calls back to priority 1 status if “imminent danger” exists, there are questions over whether dispatchers can accurately assess a potential crime scene and predict what will happen in the future.

How would a dispatcher know whether a family or domestic disturbance is going to turn physical or whether someone will pull out a weapon?

News 5 Investigates will continue pressing police for answers to these questions and we’ll update this story as new developments become available.

If you have a problem or issue you’d like our News 5 Investigates team to look into, please send an email to News5Investigates@KOAA.com or call our tip line, 719-228-6275.