DENVER – A pair of Republican state lawmakers are joining with a gun lobbying group to sue the State of Colorado in an attempt to block the new Red Flag bill, House Bill 19-1177, from going into effect.

“Democrats used illegal and unconstitutional tactics and methods to push a bill that would remove due process rights of our citizens,” Brown told reporters. 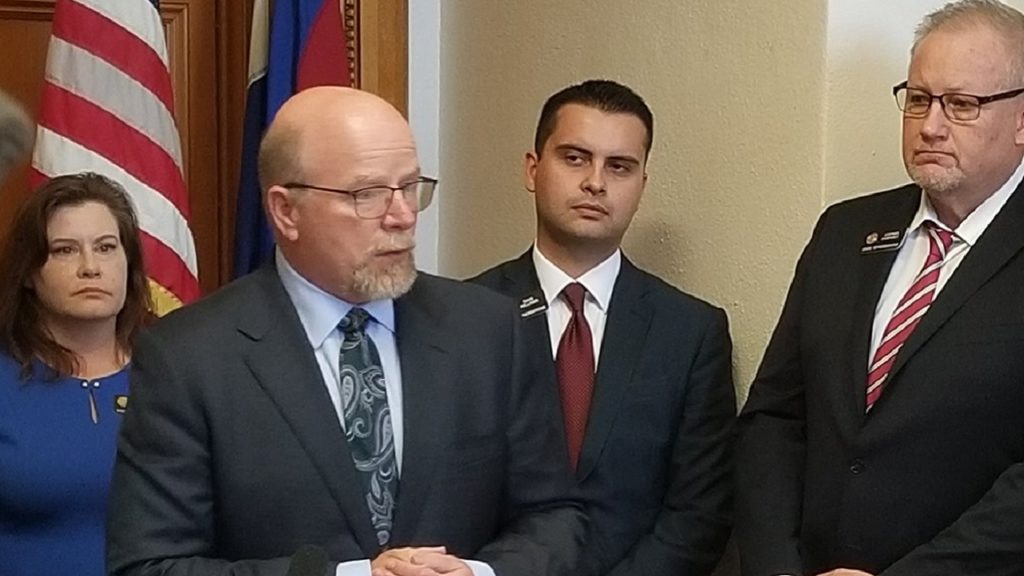 The tactics and methods he’s referring to have to do with procedural requirements in the Colorado Constitution to read at length the language of any bill when it is requested by lawmakers.

“If any one of the 100 legislators stands up and says read this bill at length, it is absolutely mandatory that the bill be read at length,” explained attorney and former State Representative Barry Arrington.

He argued that Democrats in House Leadership violated those Constitutional rules by denying requests from Rep. Dave Williams of Colorado Springs and Rep. Lori Saine of Firestone to have the bill read at length.

“That wasn’t a proper motion and that’s why I ruled it out of order,” he said of the request made by Rep. Williams. “Representative Humphrey actually did it the proper way and we honored it.”

Rep. Stephen Humphrey of Eaton made his request after Williams was denied. As the House Reading Clerk was reading the bill, additional staff members were brought to the well to read other portions simultaneously. Humphrey interrupted the reading to withdraw his motion and described the simultaneous reading as a ridiculous cacophony.

“The point is that the bill be read at length,” Humphrey said at the time. “Anybody listening at home, certainly that was unintelligible to them and I don’t think that was appropriate.”

Rep. Saine made her request during the introduction of an amendment.

“Shall we have the bill read at length again Mr. Speaker,” she said.

“That motion has already been done, it will not be considered,” Melton replied

The dispute may seem like a petty squabble over a technicality. However, Arrington told reporters there is strong legal precedent for this type of litigation.

“The Colorado Supreme Court has upheld this provision, Article V Section 22, and said if a law is passed in contravention of the divisions of Article V, Section 22, it is null, negatory, void, of no effect,” he said.

House Majority Leader Rep. Alec Garnett of Denver joined Melton in speaking with reporters after the press conference. He believes the lawsuit is an attempt to thwart the will of the people.

Bill 1177 creates Extreme Risk Protection Orders (ERPO’s) in the Colorado Judicial System. Under the new law, a police officer or a relative of a gun owner can petition a judge to temporarily remove that person’s firearms if he or she is thought to be a threat to themselves and others.

If a judge grants the request, they must schedule a hearing within two weeks to determine whether to return the guns or have them stored for up to a year while the owner seeks treatment.

Several elected officials believe the initial order granting the removal of guns is a violation of due process rights because it occurs without the gun owners’ knowledge.

Brown told reporters he still believes the bill is unconstitutional and may file an additional lawsuit if this first attempt is defeated in court.